Last night in Deltaville I did some baking – the pumpkin bread was a nice addition this morning as we left our calm marina. I also made a quick snack of plantains – warm and yummy!! 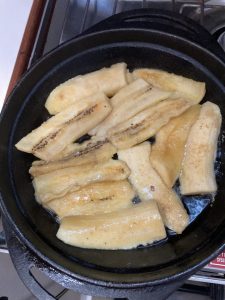 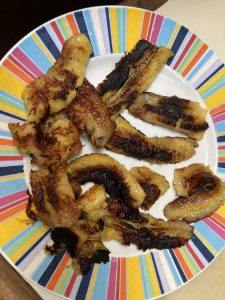 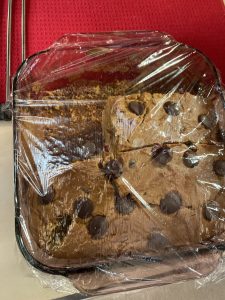 This morning worked a little different with the wind than we thought – it was calmer in the morning than after lunch. This was due to the west wind working at cross purposes to the tide. We had slack tide when we started this morning and it was a flood tide by noon. This and the wind and wave action slowed us down tremendously. It also caused much more rolling and spray for our afternoon ride into Norfolk.

Stew was really loving our ride into Norfolk harbor – lots of military jets and helicopters flying overhead and military ships lining the shore. I was more worried about us entering the “restricted” area than enjoying the sites.

Just as we passed the military police vehicle the boat lost speed and then sputtered and the engine cut out. Luckily we were actually outside the channel – closer to that restricted area I mentioned. Norfolk is one of the busiest ports on the east coast but lucky for us it was a quiet night with only a handful of boats and barges passing us.

We put up the front sail (we had just taken it down) so we had ability to steer and forward movement. We put out a call on VHF 16 to the military police vehicle so they would know why we were sitting just outside the restricted area. Then diagnosed the problem… our of fuel.

We suspected our gage was faulty and established, at this point, that is reads higher than is in the tank. We left Deltaville with half a tank, but it was now empty. Luckily we carry 5 gallons on board! Stew filled the tank but that is not the end of the story… when this happens you have to bleed the lines of the air bubbles before the engine will start.

Stew opened up the engine compartment and found that the alternator arm replacement he had made at Galesville was completely loose. This was a fortunate discovery as just a few more miles it might have snapped like before.

He fixed the alternator and took care of the air bubbles and we were on our way!! Thank goodness because it was nearing sunset (which is now 5:06pm).

Our marina was just 2 miles up the Elizabeth River so we entered just as the sun was setting. The marina is sitting right next to very low bridge and is a bit tight to maneuver. The dockmaster was there to help us dock but before we could make the approach into the slip we ran aground!! We had not noticed that the low tide was an “extreme” low tide dropping water levels more than normal.

Stew had to back the boat out of the sand without hitting the low bridge behind us… at sunset with sun at hard angle to see… honestly it was like there was a force against us this evening.

The dockmaster ended up putting us into a very large slip that was closer to the end of the dock – we still hit ground but could at least pull far enough to have our backend in the slip. It was a little crazy because the boat was under the dock by feet. But we were just happy to have shore power to heat the boat tonight – it was getting down to 38 degrees!

Both Stew and I were a bit worried how this was all going to work as we moved to high tide. I worried the lines would come loose and we would float back into the low bridge. Stew was more concerned with floating under the dock and getting crushed.

Always something to worry about!! Oh yea, and we needed deisel!