This morning we set off with yoga complete and our protein shakes made and in the fridge. No electric so no heater this morning. A bit nippy but warmer then other mornings – about 50 degrees. The terrible pilings we were attached to were somewhat challenging to disconnect from – but we did and were off by 9:30.

Today was spent dodging dredging barges, submerged logs, floating debris etc. Tiny had alerted us to several trouble spots which was very helpful and I had noted them in the navigation notes.

We made it through lock 20 and we were warned about something odd with lock 19. The something odd was a lock in desperate need of repair! We had to wait quite a long time to enter the lock. Once it was ready there was only one door that opened. All locks have 2 doors. The ropes were spread so far apart that we could not reach so we had to use the intermitten cables and hook our line to one of them… this is difficult. The boat is higher than the area where you need to feed your rope. Stew had to get off the boat to do this. The wind had picked up a little so it made it difficult.

Lock 18 was also difficult. The wind was really blowing and we had trouble getting situated. The lock attendant did not seem at all interested in waiting for us. There was now another boat in this lock with us – making it a little less roomy for mistakes on our part.

The attendant did warn us that lock 17 was closed for the day due to equipment malfunction -UGH. Lock 17 is the biggest drop on the canal at 40.5 feet. Tiny had also texted us that lock 16 was closed due to “lock inspection”. With this info we called it a day. There were no good places to tie up so we ended up at the Canal Harbor and Rotary marina. Only $1/foot – $36 for wifi and showers – best deal!!

The Canal harbor and Rotary Marina was really great. Very clean and everything advertised was open and available. We were so thrilled. They are also located close to town so a quick walk across the bridge and we had groceries! 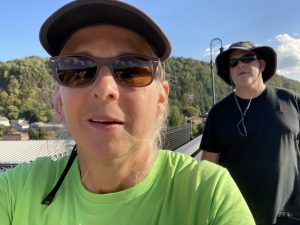 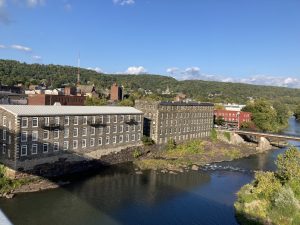 mural made of pieces of cloth 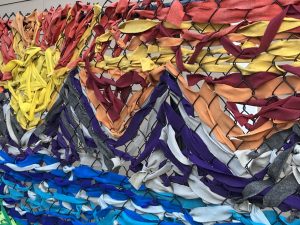 Back to the boat for long showers and late dinner of grilled sandwiches and tomato soup. We also did 2 loads of laundry. Clean and content we were in bed by 9:30.

4 thoughts on “Finally an unlocked Shower!”