Morning broke in Newark and it was very cold (36 degrees). Luckily we had electric and could run our little heater to warm things up.

The facilities here in Newark were really great with wifi, showers, and free laundry. Yesterday we took advantage of all of it!

Even with the cold, the sun was shinning and it looked like an awesome day on the canal. Lunch was easy as we had our leftovers from the restaurant last night. I have these great tin storage containers that can go right in the oven… little prep on my end for once!

Today we traveled through 5 locks. The wind was low so the locks were pretty easy. All of these locks were “rope” locks. Which means that you hold on to the slimy weighted rope they provide. I actually find these easier than the “cable” or “pipe” locks where you have to dork around and get your line secured around the pipe or cable. The boat is usually too high against the lock wall to do this when you first enter so it takes some extra maneuvering.

Even though we are traveling east we have been using the North wall of the lock. Most locks you can use either side – but I always check when I call because some of the locks have no (or few ropes) on one side.

We use the North wall because our mast is at an angle. This allows me to stand in the front and just watch the front of the mast and keep it off the wall. This is easier than standing in the middle spot and watching the mast behind you. The first lock the lock attendant had us move forward (we were on the south wall) – he was concerned that the mast in the back of the boat might catch on the wall or door as we descended… something we had not thought about when the mast was laid across the boat! Using the North wall we just need to be in the lock far enough to clear the door with the mast off the back and then I watch the front of the mast. Stew is responsible for being sure the solar panel doesn’t hit… which it shouldn’t because we have piled fender right below it.

The lock sounds like it is trickier than it is. With little wind it is not difficult to do our jobs. After the Welland Canal last summer – these are a piece of cake!! 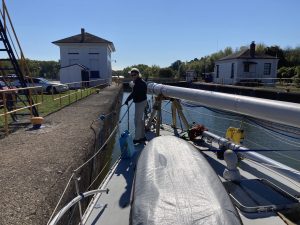 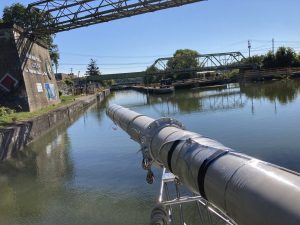 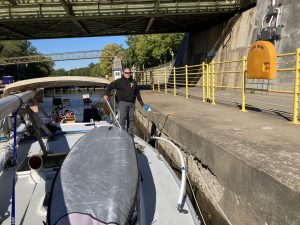 Our friend “Tiny” was texting us all day about problems they had with hitting the bottom. Some were just motoring through silt on the bottom and some were submerged logs. We were beginning to see some of this extra debris. And then it happened, we hit something pretty hard – probably a submerged log, but it felt like a rock. We were in deep water – over 9′. There is nothing that rattles you more than hitting something because you conjure up all these side effects of the hit – did it damage the keel, did it hit the prop… the problem is that it is under the boat so there is virtually no way to check it. If we were in deeper, cleaner, clearer water Stew could use the mask and snorkel to check it out. But here we just needed to push through and hope all was OK.

The scenery was just spectacular today. Colors were starting to change and there was little “tow path” traffic since it was Monday. Yesterday we saw lots of bikers, walkers, boaters etc. Birds were everywhere – a “siege” of heron seemed to be following us down the creek. We also saw 2 bald eagles! 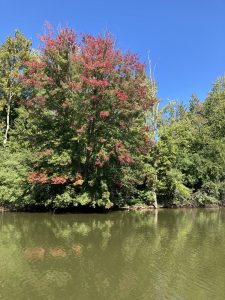 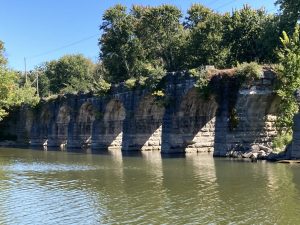 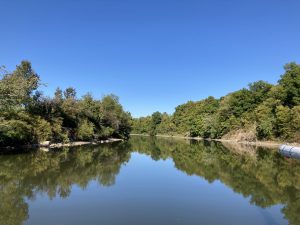 After 54 miles we were ready to stop for the night. Our stop was at Baldwinsville. We knew there would be no electricity or water, but there was a town with wifi at the library and a hardware store. There were also showers and bathrooms somewhere… we finally spotted them over on the island across the canal from us. We did walk to town and used the wifi just outside the library and the hardware store was really nicely stocked and had many of the items we were looking for.

Exhausted, we were in bed by 9:00! Nice sunset… it is setting earlier and earlier!