Its been quite a week here in New Hamburg (Wappinger Falls). First I want to tell you what a great marina we are in. The White’s have literally treated us like family!! Don even let us borrow his truck multiple times to run errands and do laundry. He also spent time explaining and teaching Stew about the prop and shaft fix. Anita, Don’s sister, was very helpful in the store with parts and telling us all about the history of the place. We honestly cannot thank them enough for making our troubles lighter as we sat on the hard.

Each morning when we got up the marina was very foggy and mist covered the water. It was really a beautiful site. The nights were pretty cold but the days were all sunny which made life good. We did have shore power on the hard so we could run our little heater at night as needed.

We arrived in the marina on Thursday afternoon, moved to the hard on Friday at high tide and proceeded to work on the shaft/prop slipping issue. It needed a new “key” and “coupling” and “tubing” but Stew had to remove them first. Saturday was spent doing this only to find out that the shaft could not be removed. A design flaw of our freedom sailboat is that the rudder prevents the shaft from being removed. So, a measure would need to be taken and used when the coupling etc were prepared over in the prop shop across the river. I spent Saturday running errands (laundry, grocery) using Don’s nice new white truck!

We were both pretty exhausted from the stress of the week so we decided to relax on Sunday.

We talked to Anita (the store was open Sunday morning) and learned alot about the place – the marina was originally a lumber yard before her father bought the place and the building that housed the store was part of the lumber yard. The pictures below show the building and then the safe within a safe within a safe! Must have had some really important stuff to have so many levels of safes! 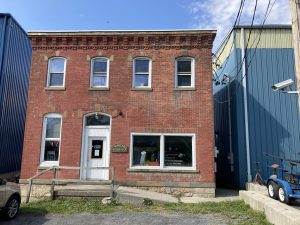 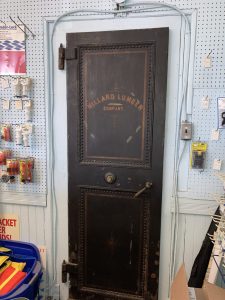 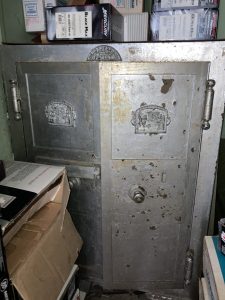 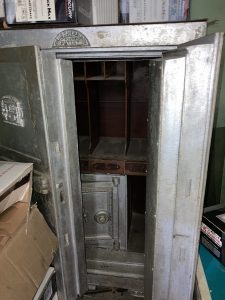 I decided to take a walk and found some paths up the mountain to check out. Before I went too far I ran into a motherless fawn. I actually almost hit her the day before in Don’s truck. She was not very skittish until a squirrel spooked her.

Monday it was back to work. Stew spent the morning running around getting the parts for the shaft/prop fix. I baked a spice cake and did some much needed cleaning in the boat.

We decided this was a great opportunity to paint the bottom of the boat with salt water specific bottom boat paint. So Tuesday we spent most of the day working on that.

Tuesday we also did some wiring, finishing up some of the mast wiring from stepping the mast. We also ran the lines from the other

Stew needed more help from Don to complete the prop/shaft fix and Wednesday he was able to get it completed! Our hope was to go back in the water at high tide on Wed and hope the prop didnt leak and all was good.

As it turned out they were calling for 50K winds on Wed so that caused more water to be pushed into the marina during rise to high tide. So we could be moved into the water earlier than expected YAY!! Due to the high winds I had already taken the bimini down to keep us from taking flight while on the hard.

Once in the water we did a little spin out into the Hudson River to check how the prop was performing. EXCELLENT! We quickly returned to our spot on the dock to sit out the high winds. As the night progressed the low tide set in and the water below us dropped to 3 feet!! We draw 6 feet. So we were sitting in mud. Our hope was to rise early, hit the early high tide, and head off to NYC!

But that was not to be. We did wake early ready to take off with morning high tide but the depth finder only displayed 4.5 feet. So we were still pretty deep in the mud. So, we would have to wait until the next high tide in the afternoon.

Since we were stuck there all day Stew decided to get the boat organized and cleaned and put the bimini back up. We were still missing a multiwire connector to finish the solar wiring and Don suggested a place in Poughkeepsie that might have it. They did and he lent me his truck to pick it up suggesting I also provision etc. I took advantage and spent the entire morning and early afternoon provisioning, laundry, and picking up the part we needed.

High tide still did not put us at 6′ water depth but we were over 5′ and Don thought we could get out and so we did. It was far too late to head down the river so we spent the night on the fuel dock… banging and clanging as before. But we did get that wiring done for the solar panels!!